Garry Hansen owns several properties in the Coomandook area. Hansen Farms comprise an area of approximately 7,000 hectares with 5 homes spread across the properties.

Garry Hansen owns several properties in the Coomandook area. Hansen Farms comprise an area of approximately 7,000 hectares with 5 homes spread across the properties. Soil types vary greatly on the properties with established sandy loams over limestone and deep grey sands on the ridges. Hansen’s enterprise comprises continuous cropping of the better soil types with cereals, oilseeds and hay; and permanent lucerne and veldt grass on the deeper sand with a few saline based pastures.

Garry relies heavily on mains water and the property has a sophisticated network of approximately 50 km’s of 1 inch, high pressure pipeline feeding several water tanks used for crop spraying and fire fighting, and connecting to numerous water points and feed troughs used by approximately 150 head of cattle and 3000 sheep. Water meters measure water usage at the 10 properties including the 5 homes.

Hansen Farms has a strong emphasis on sustainability and water management. High pressure piping has been installed due to extremely high pressure mains water supplied at approximately 120-130 psi. Piping systems have been constantly upgraded to meet the water authority’s changing requirements, ensuring that pipes can withstand the extreme water pressure. Regular pipe upgrades are required to secure financial assistance from the water authorities when concealed underground leaks occur.

Garry Hansen said “It was the escalating water bills peaking at $83,000 for the last year that lead me to search for a water management solution and on recommendation I elected to install the Watersave real-time monitoring solution. This system alerts me regarding water leaks immediately they occur and with this system in place it is my goal to reduce water usage by up to 50% this financial year. I aim to achieve this with a combination of water use monitoring, automated leak detection and timely rectification of infrastructure damage. At this early stage my objective of 50% reduction in water use seems achievable”.

Today, Garry has 19 main supply meters of which 14 are being logged using the Watersave SmartMeter Solution for farmers. He logs in several times per week to gauge water usage across all meters. Leaks occur regularly due to livestock damaging pipes, float valves and troughs; or supply lines fracture causing extensive water loss. In the past, leaks and excessive water usage has only been identified by manual checking of the property or manual meter reads showing high flows. 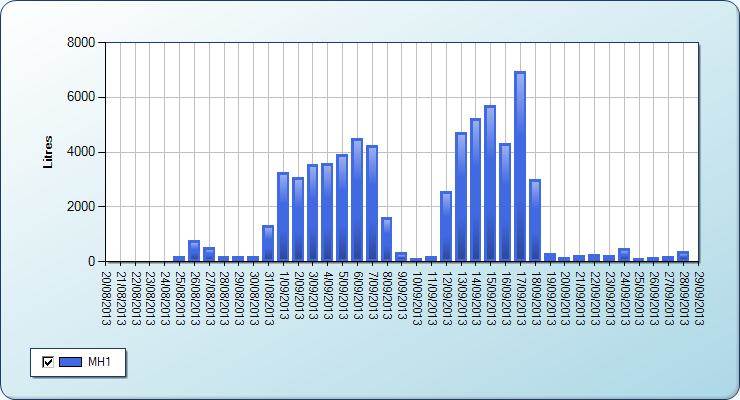 The above graph shows water usage at one of Garry’s properties immediately after the installation of the Watersave SmartMeter Solution. Excess water usage amounted to approximately 4,000 litres per day over a 3 week period, before the leak location was pinpointed and rectification work could be completed. Without the SmartMeter Solution this leak could have gone undetected for some time, as the problem was hidden beneath the roadway in deep sandy soil. The leak was caused by a burst underground pipe and the dip in the middle of the graph (above) occurred as a result of the water being switched off at various locations in an attempt to isolate the leak. After rectification work had been completed, normal water usage resumed.

Had this hidden leak remained undetected, excessive water usage would likely have continued for a complete billing period, resulting in a water bill of over $1200 at this location alone. With more than 19 water meters across Hansen Farms remote access to accurate water data simplifies water management and increases efficiencies significantly.

Watersave’s SmartMeter Solution displays water usage on a graph or datasheet and data is accessible via smart phone or web browser. Using the SmartMeter Solution in this manner, Hansen Farms is able to minimize water loss and Garry Hansen can focus on running a more profitable enterprise. Equally understanding water use across all main water meters will enable Garry to rationalize and remove unnecessary water meters thereby reducing the Quarterly supply charge for several of his meters.