Leak detection at a Senior Soccer Oval
Using the threshold setting function of the SmartMeter Solution, Council was alerted when the flow rate at the oval did not return to zero consumption after a period of irrigation. The SmartMeter Solution recorded a flow rate of approximately 750 litres every 15 minutes between the hours of 5.30pm on 8 January 2013 and 9.15am the following day.
Council’s Building Maintenance Supervisor investigated the excess water use and identified a tap, that was not readily visible, had been deliberately left on. Subsequently a vandal proof tap was installed to prevent future water wastage. Left undetected this issue could have resulted in 26,280 kilolitres of water loss and $56,975 in water costs over the period of 1 year.

Leak Detection at Precinct Sporting Complex
Using the threshold setting function of the online SmartMeter system, Council was alerted to a baseline flow at the sporting complex consuming 75 litres every 15 minutes. Subsequent investigations revealed the base flow was partly caused by a leak in an underground valve in the sports field’s irrigation system. Left undetected this leak could have resulted in 2,628 kilolitres of water loss and $5,698 in water costs over the period of 1 year. 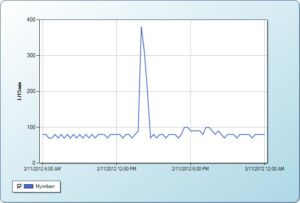